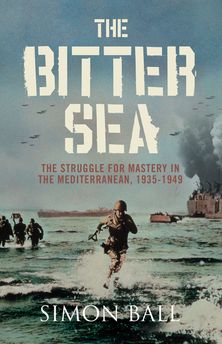 The Mediterranean Sea lies at the very heart of recent world history. To the British during the Second World War, the Mediterranean was the world’s great thoroughfare. To the Americans, it represented the answer to anti-imperialism. And to Mussolini, it encapsulated his violent vision of conquest. These three great powers attempted to overthrow the existing order in the Mediterranean, resulting in a collision of allies as well as enemies that hadn’t been seen before: the Germans fought against the Italians, the Americans against the Arabs, the Jews against the British, the French against nearly everyone. The Mediterranean was indeed ‘the bitter sea’. In this masterly history, Simon Ball takes us through the tumultuous events set in motion by Mussolini’s lust for conquest that ended with the creation of Israel. Long drawn-out battles on land, sea and air – dominated by WWII’s most illustrious leaders, Churchill, Eisenhower and Rommel amongst them – resulted in Allied victory in the battle of El Alamein, the terrifying desert campaigns of Africa and the eventual defeat of Italy and then Germany. The wars in the Mediterranean had huge consequences for all those who fought in them, but none more profound than those experienced by the lands, nations and peoples that lived around the sea itself. Based on entirely original research, ‘The Bitter Sea’ is expertly written, utterly compelling and unquestionably important.

Reviews of The Bitter Sea