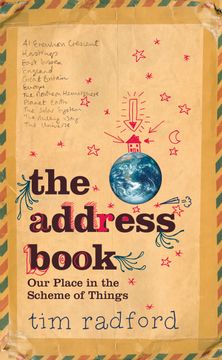 The Address Book: Our Place in the Scheme of Things

At the start of each school term, at the age of about 10, I did something that I suppose a million other 10-year-olds have done…

The Address Book starts with some of the fundamental questions asked by everyone, in every culture since the beginning of civilisation. Who am I? Where am I? Where am I going? Tim Radford attempts to answer them by drafting in a technique he first used as a school-boy, when he wrote his address in the inside front cover of his exercise book every term, starting with the house number, the street name, the town, and proceeding upwards through levels of scale – the hemisphere, the planet, the solar system, the galaxy – until he reached the final line, the universe itself.

So – this is a book written on a vertical rather than a horizontal axis. We open with Tim in the present day, in Hastings, sitting at his desk, thinking about his house, his possessions, how they have shaped him and how he has affected them, how a house becomes part of our identity and what binds us to the objects in it. The next chapter deals with Hastings itself; the town as a unit of scale, why we associate ourselves with one place rather than another. And so on, upwards through levels of magnitude. As the units of space grow larger, so Tim himself dwindles and the bigger, colder forces of astronomy and astrophysics come into play. By the time we reach the address’s final line we are beginning to understand that there is no final answer to the question “Where am I?” – behind every answer lies a new question, receding into unthinkable distance, to the spectacle of galaxies falling away from each other into nothingness.

The Address Book is fascinating, entertaining, unsettling and insatiably curious.

Reviews of The Address Book: Our Place in the Scheme of Things