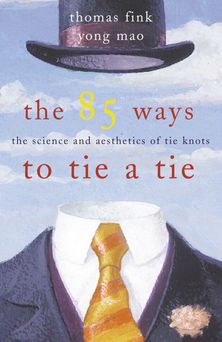 If Einstein had been left alone in Tie Rack for long enough perhaps he would have worked it out : why do people tie their ties in only four ways? And how many other possibilites are there? Two Cambridge University physicists, research fellows working from the Cavendish laboratories, have discovered via a recherche branch of mathematics – knot theory – that although only four knots are traditionally used in tying neck ties another eighty-one exist. This is the story of their discovery, of the history of neck ties and of the equations that express whether a tie is handsome or not. Of the eighty-one new knots, six are practical and elegant. We now have somewhere else to go after the Pratt, the Four-in-Hand, the Full and Half Windsor. Sartorial stylishness is wrapped effortlessly around popular mathematics. A concept developed to describe the movement of gas molecules – the notion of persistent walks around a triangular lattice – also describes the options for tie tying. Pure maths becomes pure fashion in a delightfully designed little package from Fourth Estate.