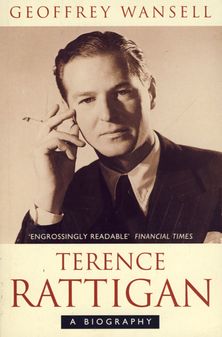 SHORT-LISTED FOR THE 1995 WHITBREAD BIOGRAPHY PRIZE

‘Wansell provides much the fullest portrait of Rattigan so far… taking you as close to the man as you are likely to get.’ Sunday Telegraph

For 3 decades this century, Terence Rattigan was a gilded figure to millions of theatre-goers. Two of his plays ran for more than 1000 performances in the West End, a record to this day; four others ran for more than 500. Rattigan numbered amongst his friends all the great actors of his time including John Gielgud, David Niven, Richard Burton and Elizabeth Taylor, Margaret Leighton, Peggy Ashcroft and Vivien Leigh. Until now no biography has fully unravelled the complexities of at the core of Rattigan’s genius from which sprang four classics of this century: The Deep Blue Sea, Separate Tables, The Browning Version and The Winslow Boy. Wansell is the first biographer to have been give full access to thousands of private papers at the British Library. Sometimes dismissed as a middle-class entertainer, Rattigan is revealed here as having a far deeper and darker nature.

Reviews of Terence Rattigan: A Biography