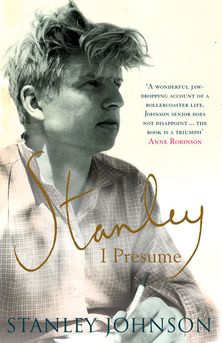 Stanley’s story begins with a loud bang – when his father, an RAF pilot in the Second World War, crash-lands a Wellington bomber on a Devon airfield. A few years later Stanley’s parents buy a sheep farm on nearby Exmoor, where Stanley does much of his growing up.

Stanley would keep his links with this much-loved rural idyll throughout his life – while going on to become an explorer, author, occasional politician and also one of the world’s first environmentalists. A sparkling raconteur and experienced thriller writer, in Stanley I Presume great stories are told in great style.

On leaving school in 1958 Stanley travelled alone through South America – hitching rides across the jungle on Brazilian Air Force planes – and shortly afterwards he rode a motorcycle 4,000 miles from London to Afghanistan, tracing the route of Marco Polo with two friends.

After winning Oxford University’s poetry prize with a love poem – written following a hilltop tryst in the West Country – Stanley went on to do various adventurous jobs, before working for the billionaire John D Rockefeller III, the World Bank, the United Nations and the European Union.

Stanley married and started a family young – Boris was born in New York when his father was 23 – and while Boris would go on to become big news, the family’s forbears also provide quite a story, as Stanley finds out.

For the Johnson family’s roots are not just in the West Country, but in Turkey too – where, as Stanley discovers, his politician grandfather Ali Kemal was torn to pieces by an angry mob. Stanley visits a Turkish village where the locals are blonde – later he learns that he and Boris are direct descendants of George II.