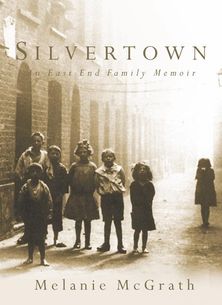 Silvertown is the story of one East End family, across three generations, living on the fringe of the Thames.

Silvertown itself is a ribbon of marshland that sits beside the King George VI dock near Bow Creek. In 1944 Melanie McGrath’s grandfather Lenny, bought the Cosy Café in Silvertown. From here Lenny, his mistress, his wife and his daughter served egg and chips, liver and bacon, eels and jellied custard to the passing trade from the thriving docks. Business was good. By the late forties Lenny was the only café owner in the East end to drive a Cadillac.

Like many others on the fringes of the Thames in East London, the story of Melanie McGrath’s family is a tidal one. Originating from other parts, her family spilled into the area to take advantage of the docks and, having made a little money spilled back out to the west again, headed for a better place.

Fifty years on, Silvertown stares the Millennium Dome square in the eyes. In the past half-century the Docklands terrain has been bombed, rebuilt, renovated, slum-cleared and finally razed pending ‘regeneration’. Overlooked by successive enterprise projects that have created the City Airport, Canary Wharf and the Dome itself, the waters of Silvertown sleep, awaiting a future that remains undecided.

In Silvertown Melanie McGrath has, through the story of her family, recaptured this slip of land from it’s post-industrial depression, and with it the traditional heartlands of east London before each fades quietly from memory.