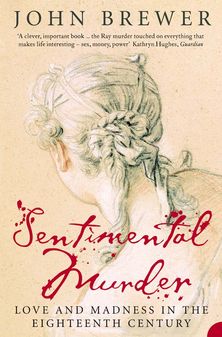 On an April evening in 1779, Martha Ray, mistress of the Earl of Sandwich, was shot on the steps of Covent Garden by James Hackman, a young soldier and minister of the Church of England. She died instantly, leaving behind a grief-stricken lover and five small children. Hackman, after trying to kill himself, was arrested, tried and hanged at Tyburn ten days later. The story was to become one of the scandals of the age. It seemed an open-and-shut case, but why had Hackman killed Ray? He claimed he suffered from ‘love’s madness’ but his motives remained obscure. And as Martha Ray shared the bed of one of the most powerful and unpopular politicians of the day (and one of Georgian London’s greatest libertines), the city buzzed with the story, as every hack journalist sharpened his pen. John Brewer has written an account of this violent murder that is as thrilling and compelling as the best crime novel. Atmospheric, beautifully written, and alive with the characters and bustle of 18th-century London, the book examines in minute detail the events of a few crucial moments and gives an unforgettable account of the relationships between the three protagonists and their different places within society. However, the interest in Martha’s murder did not end with the Georgians, and ‘Sentimental Murder ‘ranges over two centuries, populated by journalists, biographers and historians who tried to make sense of the killing. And so it becomes an intriguing exploration of the relations between history and fiction, storytelling and fact, past and present. John Brewer has transformed a tragic tale of murder into an historical masterpiece.