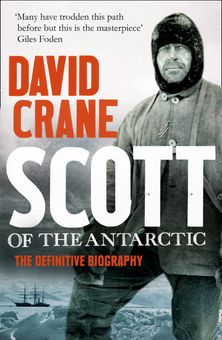 ‘It seems a pity, but I do not think I can write more…For God’s sake look after our people.’ These were the final words written in Scott’s diary on 29 March 1912, as he lay dying in his tent with Birdie Bowers and Edward Wilson. Oates had taken himself into a blizzard a few days before, and the fifth member of the Polar party, Edgar Evans, had died some ten days previously, worn out by the cold and physical effort of the journey across Antarctica. Since then Scott has been the subject of many books – many hagiographical, others dismissive and scathing. Yet in all the pages that have been written about him, the personality behind the legend has been forgotten or distorted beyond all recognition. David Crane’s magisterial biography, based on years of close and detailed research with the original documents, redresses this completely. By reassessing Scott’s life and his substantial scientific achievements, Crane is able to provide a fresh and exciting perspective on both the Discovery expedition of 1901-4 and the Terra Nova expedition of 1910-12. The courage and tragedy of Scott’s last journey are only one part of the process, for the scientific enquiry that led up to it transformed the whole nature and ambition of Antarctic exploration. Scott’s own voice echoes through the pages. His descriptions of the monumental landscape of Antarctica in all its fatal and icy beauty are breathtaking; his honest, heartfelt letters and diaries give the reader an unforgettable account of the challenges he faced both in his personal life and as a superlative leader of men in possibly the harshest environment on the planet. Written with the full support of Scott’s surviving relatives, this definitive biography sets out to reconcile the very private struggles of the man with the very public life of extremes that he led. Note that it has not been possible to include the same picture content that appeared in the original print version.