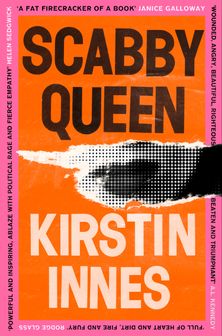 Now that she’s gone, those who loved her, those who hated her and those who felt both ways at the same time are forced to ask one question:

Who was Clio Campbell?

As news spreads, the story of Clio’s life spreads with it: from the Isle of Skye to an anarchist squat in Brixton, from a yoga retreat in Greece to Glasgow on the night of the Scottish referendum. Half a century of memories, of pain and of joy, and that peculiar feeling in between the two, are wrenched to the surface.

Scabby Queen is a portrait of a woman who refuses to compromise, and a picture of a country that does nothing but. It’s about the silencing of women’s voices, about the destructive power of the celebrity machine, but most of all it is about empathy: its motives, its limits and the way it endlessly transformed.