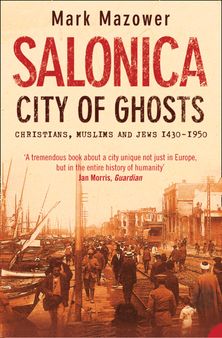 Salonica is the point where the wonders and horrors of the Orient and Europe have met over the centuries.

Written with a Pepysian sense of the texture of daily life in the city through the ages, and with breathtakingly detailed historical research, Salonica evokes the sights, smells, habits, songs and responses of a unique city and its inhabitants. The history of Salonica is one of forgotten alternatives and wrong choices, of identities assumed and discarded. For centuries Jews, Christians and Muslims have succeeded each other in ascendancy, each people intent on erasing the presence of their predecessors, and the result is a city of extraordinarily rich cultural traditions and memories of extreme violence and genocide, one that sits on the overlapping hinterlands of both Europe and the East.

Mark Mazower has written a work of astonishing depth and originality about this remarkable city. Magnificently researched and beautifully written, it is more than a book about a place; it studies in detail the way in which three great faiths and peoples have inhabited the same territory, and how smooth transitions and adaptations have been interwoven with violent endings and new beginnings.