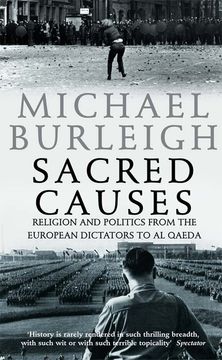 Beginning with the chaotic post-World War I landscape in which religious belief was one way of reordering a world knocked off its axis, ‘Sacred Causes’ is a sweepingly assured critique of how religion has often been camouflaged by politics. Covering a vast canvas, Burleigh examines the many ‘secular’ religions the twentieth-century produced, analysing how successive totalitarian leaders fantasised and aped the hierarchy, rites and ritual of the churches in the desire to return to the day where ruler and deity were one. All the many bloody regimes and movements of the century are here, from Stalin’s Soviet Union, Hitler’s Germany, Mussolini’s Italy, Franco’s Spain through to the modern scourge of terrorism the current ‘War on Terror’. Often blackly comic, the book shows how the church has been swayed by – and contributed to – conflicting secular currents. He traces religious beliefs and institutions from a time when the church, disenchanted with both democracy and fascism, began to search for political alternatives. During the Second World War, the churches faced agonising dilemmas, notably how to respond to the Holocaust. Combining the deeper workings of history with an urgent sense of the contemporary relevance of his material, Burleigh challenges his readers to consider why no-one foresaw the religious implications of massive Third World immigration, as well as what is driving current calls for a ‘civic religion’ with which to counter the terrorist threats which have so shocked the West.