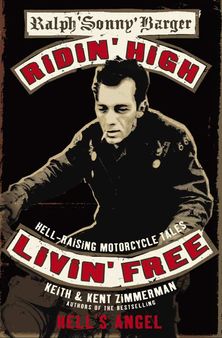 An American legend and hero to bikers around the world, Sonny Barger is respected and feared by people on both sides of the law. In ‘Ridin’ High, Livin’ Free’, he presents a diverse collection of hell-raising tales, filled with a colourful cast of characters: the Silver Satin Kid, the Wandering Gypsy, the Peckerwood Pans, Animal, and Lone Wolf.

These are previously untold real-life experiences, including the ‘missing years’ of Steve McQueen. Race across the Bay Bridge high on acid on the back of a chopper with Loaded Linda and Limey Joe; slide across the pavement on your belly with DOA; and journey to the north pole with Moto Guzzi Ron.

From Helen’s BBQ diner in Oakland to an Irish pub in Shanghai, ‘Ridin’ High, Livin’ Free’ recounts pavement-rough scrapes with the law, roadway adventures and disasters, brawls and bonding, all in the spirit of the open road. What these rebel tales have in common is the relentless pursuit of freedom, individuality and, of course, the ultimate ride.