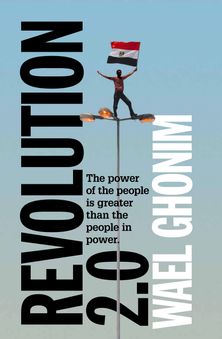 Social media allow ideas to be shared. They are places where people can unite, Revolutions can begin. A new type of Revolution – Revolution 2.0

Wael Ghonim used to be a man unwilling to publicly criticise the Egyptian regime. Like many, he was silenced by the fear of reprisals.

But in January 2011 Wael decided he had seen too much oppression go unchallenged and started a Facebook page calling for the people to protest. It became a rallying-point for revolution and Egyptians took to the streets, while Wael was held by security forces for a horrifying 11 days.

In an attempt to quell the revolution the government moved to shut down the internet, fearful of its ability to mobilise the people. It was too late; the people were no longer afraid of making themselves heard.

Revolution 2.0 is a unique insider’s story from the heart of the Egyptian Spring. Wael Ghonim gives unparalleled insight into why the Egyptian people finally rejected 30 years of oppression and found a voice.