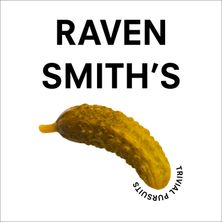 This audiobook includes an exclusive interview between Raven Smith and his editor, in which they discuss the themes of the book and illuminate further on some of the stories and events detailed within.