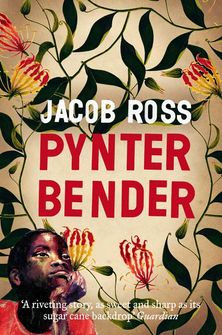 Pynter Bender is a child of the cane fields of Grenada, the second smallest independent state in the world. This is Jacob Ross’s extraordinary debut novel of a boy born blind but whose eyes are healed, allowing him to see great beauty. The story charts the painful awakening of a rural population, essentially organised around serfdom, into a raw and uncertain future that can only be achieved through fighting – a civil war that Pynter is drawn in to. Pynter’s father leaves him to be brought up by the Bender women, a close-knit group of aunts and cousins, and Pynter’s early life is shaped by these women. He begins to understand a world beyond them when his uncle, Birdie the Beloved, the best baker on the island, occasionally returns to the family on his brief periods out of jail. When Pynter comes to love a woman, and later flees his family to hide in the canes from the marauding soldiers, he can no longer ignore the violent world beyond the yard where he lives. ‘Pynter Bender’ is about the conflict between the world of men and women, men who walk away from their families and from the cane fields and their women who forbear. It brilliantly describes the birth of a modern West Indian island and the shaping of its people as they struggle to shuck off the systems that have essentially kept them in slavery for centuries.