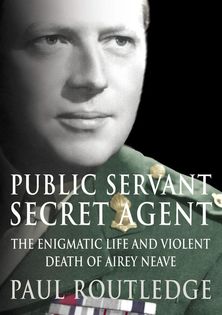 Neave’s sensational escape and his equally sensational death are the extent of most people’s knowledge and appreciation of one of Britain’s most mysterious public figures. The two events, separated by thirty-five years are crucially linked: Neave joined a division of MI6 following his wartime bravery to advise other would-be escapees. He was also active in establishing the Gladio network with SOE. Soon after the war, and after working as a prosecutor at the Nurenburg trials, he successfully entered Parliament as Conservative MP for Abingdon, where he sat until his death. Overlooked by Macmillan and Heath for high office, ostensibly on health grounds, Neave pursued a public life of a very unusual kind: he became conspicuously inconspicuous, operating almost entirely outside the public gaze. During the early 1970s Neave was in contact with anti-Wilson plotters and by 1974 he was calling for Edward Heath’s resignation too, seeing weakness in the Tory leader’s capitulation to the miners. Thatcher was his crusading angel and he ran a brilliant leadership campaign, fooling more experienced candidates into complacency and securing Thatcher’s triumph. She offered him any job in her Cabinet in return. Inexplicably to most he chose Northern Ireland and had prepared the most confrontational and explicitly belligerent strategy ever seen there. A matter of weeks before Thatcher’s General Election victory began eighteen years of Conservative government, Neave’s extraordinary life of intrigue and scheming was ended by a plot he had not foreseen.