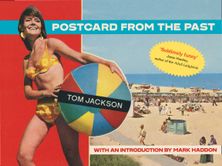 Postcard From The Past

WITH AN INTRODUCTION BY MARK HADDON

In Postcard From The Past, Tom Jackson has gathered a collection of the funniest, weirdest and most moving real messages from the backs of old postcards.

‘This book is an absolute treat’ Holly Walsh

‘Transfixing, beguiling, warmly haunting. These are the ghosts of a childhood’ Robin Ince

‘One of the saddest and funniest picture books you’re ever likely to read’ Owen Hatherley, author of The Ministry of Nostalgia

‘A book of rare and genuine beauty’ James O’Brien, LBC

Reviews of Postcard From The Past