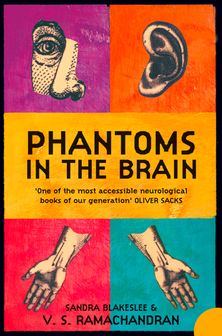 ‘Phantoms in The Brain’ takes a revolutionary new approach to theories of the brain, from one of the world’s leading experimental neurologists.

‘Phantoms in The Brain’, using a series of case histories, introduces strange and unexplored mental worlds. Ramachandran, through his research into brain damage, has discovered that the brain is continually organising itself in response to change. A woman maintains that her left arm is not paralysed, a young man loses his right arm in a motorcycle accident, yet he continues to feel a phantom arm with vivid sensation of movement. In a series of experiments using nothing more than Q-tips and dribbles of warm water the young man helped Ramachandran discover how the brain is remapped after injury. Ramachandran believes that cases such as these illustrate fundamental principles of how the human brain operates. The brain ‘needs to create a “script” or a story to make sense of the world, a unified and internally consistent belief system’.