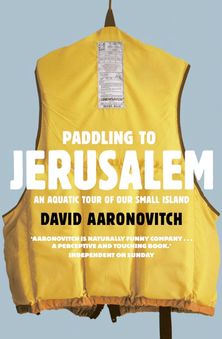 Paddling to Jerusalem: An Aquatic Tour of Our Small Country

David Aaronovitch, the award-winning columnist and broadcaster, canoes round the waterways and canals of England on the eve of the new millennium.

In the last months of the second millennium, a rather large middle-aged man set out on an epic journey to discover England and himself. By canoe. Paddling to Jerusalem is the story of where he went, who he met and what he thought. It is a tale of moderate danger, of slow adventure, of big exercise, wet water and bad food. Above all it is a saga about us – all of us.

Beginning at Camden Lock in London, the journey winds through old countryside and new towns, past cathedrals and disused wharves, down ancient waterways lined with crumbling factories and newly restored warehouses. This is the wet high road of ‘Our Mutual Friend’ and ‘Three Men in a Boat’, at a key moment in England’s history.

Reviews of Paddling to Jerusalem: An Aquatic Tour of Our Small Country