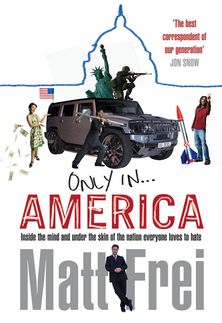 Matt Frei, the BBC’s Washington correspondent, goes under the skin of the nation’s capital to discover the paradox of the world’s last remaining superpower.

Imagine a city so powerful that the weapons commanded from its ministries could obliterate the globe many times over and yet so vulnerable that it cannot prevent a seventeen-year-old boy from killing half a dozen of its inhabitants in a shooting spree that lasts for a whole month. A city so rich that it spends 150 million dollars a year on corporate lunches, dinners and fundraisers and yet so poor that its streets are frequently as potholed as those of any forgotten backwater in the developing world. A city that deploys more armed officers per square mile than any other in the world but has earned the title of being its country’s murder capital. A city where 565 elected Congressmen and Senators are chased, charmed, cajoled and sometimes bribed by 35,000 registered lobbyists; where the most illustrious resident travels with a fleet of planes and a small army of body guards but where the mayor for 12 years was a convicted crack addict who believed that every law in his own country was racist, ‘including the law of gravity’. A city that plays host to seventeen different spying agencies, employing 23,000 agents, none of whom were able to discover a plot that involved flying civilian airliners into buildings, even though the plotters had littered their path with clues. Hard to imagine? Welcome to Washington DC: the Rome of the 21st century.

It is a place that inspires awe, revulsion or analysis but rarely affection. Every newspaper editor tells his new Washington correspondent to travel outside ‘the Beltway’, to get under the skin of the real America beyond the 495 Interstate that snakes the city with its glutinous flow of traffic all day long. But after almost four years in Washington, Matt Frei has realised that the key to understanding America lies within the walls of the diamond shaped District of Columbia.