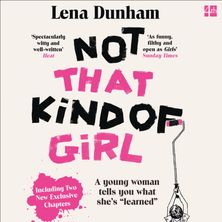 Not That Kind of Girl: A Young Woman Tells You What She’s “Learned”

Lena Dunham, acclaimed writer-director-star of HBO and Sky Atlantic’s ‘Girls’ and the award-winning movie ‘Tiny Furniture’, displays her unique powers of observation, wisdom and humour in this exceptional collection of essays.

Reviews of Not That Kind of Girl: A Young Woman Tells You What She’s “Learned”