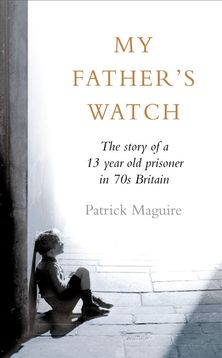 My Father’s Watch: The Story of a Child Prisoner in 70s Britain

The intensely moving memoir of Patrick Maguire, one of the ‘Maguire Seven’ wrongly imprisoned as a teenager for making bombs for the IRA.

On the night of October 5 1974, an IRA unit left bombs in two Guildford pubs: five people were killed. On the night of December 3 1974, on the strength of fabricated testimony extracted under duress from Paul Hill and Gerard Conlon (whom the police mistakenly believed had planted the Guildford bombs), Anne and Paddy Maguire, two of their four children, Vincent and Patrick, plus other family members and friends, a total of seven in all, were arrested at their home in West London. On 22 October 1975 the Guildford Four were wrongfully convicted of bombing the two pubs in Guildford. On the 4 March 1976 the Maguire Seven, as they had become known, were found guilty of possession of the nitro-glycerine used in those bombings.

On 19 October 1989 the verdicts on the Guildford Four were quashed. On 26 June 1991 the convictions against the Maguire Seven of handling explosives were quashed and just over a year later, Sir John May, after producing a report on the Maguire Seven case, described it as the worst miscarriage of justice he had ever seen.

Behind these dates lie human stories – ‘My Father’s Watch’ tells that of Patrick, who was the youngest of the accused, at fourteen years old. He was sentenced to four years and when he came out he had no home and no family, as both parents were still in jail. This book takes us through Patrick’s entire life, from his working-class childhood in West London to the difficult life he has led since prison, the roots of which go back to the wrongful convictions and the destruction of the family that followed.

Patrick Maguire and the novelist Carlo Gébler have written ‘My Father’s Watch’ jointly. It is not a ghosted work – told in Patrick’s own voice, it is a lucid and inspiring account of one individual’s experience of an appalling injustice, as well as a reminder, as the war against terror ratchets up, of just how much harm a state can do to its own innocent citizens in the name of security.

Reviews of My Father’s Watch: The Story of a Child Prisoner in 70s Britain