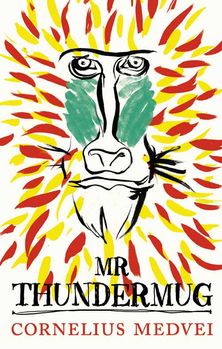 In a faraway city, a baboon has been found on the side of the street – perhaps not such a remarkable thing in those parts. But the oddity lies not in his being on the pavement, but in his powers of human speech. His English is impeccable, his grammar beyond reproach. As he becomes more and more involved in human affairs, Mr Thundermug, as he comes to be known, finds himself at a loss. What is he to make of his wife and children, who remain firmly rooted in the monkey world, unable to read or write? And what is he to make of humans, who have accused him of cruelty to animals (his wife sleeps in the bath of an old abandoned house) and who reproach him for wandering around naked? In this surreal and touching tale – reminiscent of Edward Gorey – Cornelius Medvei brings us one of the most outlandish and unusual novellas of recent years. His lithographs delightfully illustrate this quirky little oddity.