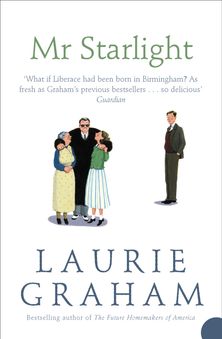 The Boff brothers live at home with their Mam. They have a lav down the yard and a jerry under the bed and they play bookings at the Birmingham Welsh and the Rover Sports and Social. Cled tinkles on the piano and Sel is the crooner. ‘Sel’s the one who can lift people out of themselves and send them home feeling grand and you can’t argue against that’ says Cled. When Sel decides he must try his chances with the brights lights of New York City, he packs up his sequinned suits and enlists his brother as travel companion and accompanist. What follows is a tale of mad-cap high jinx; of mirrored ceilings and heart-shaped tubs; of screaming girls, romancing and No Business Like Show Business. As jealousy starts encroaching on the brothers’ relationship, Cled finds that there are more secrets in his family than he had bargained for. With her characteristic wit and wisdom, Laurie Graham brings us a touching celebration of the sparkle and dust of family life.