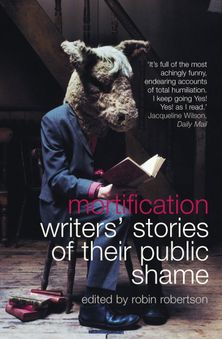 A collection of stories from some of the world’s greatest writers about their own public humiliation.

Humiliation is not, of course, unique to writers. However, the world of letters does seem to offer a near-perfect micro-climate for embarrassment and shame. There is something about the conjunction of high-mindedness and low income that is inherently comic; something about the very idea of deeply private thoughts – carefully worked and honed into art over the years – being presented to a public audience of dubious strangers that strays perilously close to tragedy.

Here, in over eighty contributions, are stories about the writer’s audience, the fellow readers, the organiser, the venue, the ‘hospitality’, or the often interminable journey there and back. There are the experiences of teaching and being taught, reviewing and being reviewed, of festivals and writers’ retreats, symposia, signing sessions, literary parties and prizes, the trips abroad, with all the attendant joys of translation and, finally, the bright worlds of television and radio that can bring so many more people to share in your shame.

These are the best stories: those told against the teller…

Reviews of Mortification: Writers’ Stories of their Public Shame