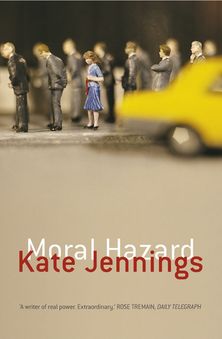 On Wall Street, reflects Cath, women are about as welcome as fleas in a sleeping bag. Funny, liberal and left-leaning, she is an unlikely candidate to be writing speeches on derivatives in a cubicle in a Manhattan tower, ‘putting words in the mouths of plutocrats deeply suspicious of metaphors and words of more than two syllables’. She finds herself on Wall Street because she needs serious money. After ten good years, her beloved older husband Bailey is suffering from Alzheimer’s.

So begins Cath’s journey into two nightmare worlds. By day she deals with the topsy-turvy logic and ingrown personalities at work in high finance; by night she has to watch the slow disintegration of the man she loves. In between, she must stop herself from falling apart. Friendship with Mike, a colleague and incognito socialist, helps her survive the assault course of the workplace with its vicious office politics. But as the money markets hurtle towards financial meltdown, Cath faces personal disaster and a moral hazard that she cannot ignore.

Kate Jennings’ prose is lean yet rich in unexpected, telling detail. Tense, taut and compulsively readable, ‘Moral Hazard’ is peopled by extraordinary characters and informed by a mordant, witty intelligence.