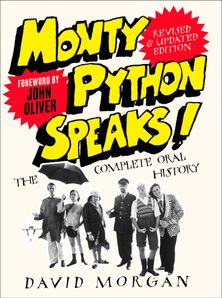 In Monty Python Speaks!, David Morgan has extensively interviewed the entire world of Python – from producers and collaborators like Douglas Adams and Hank Azaria to the founding members themselves – to create the ultimate record of Britain’s most rebellious and successful comedy act. Packed with rare and never-before-seen photographs, and told with the group’s customary wit and irreverence, this newly updated edition, published to o is the inside story of a comedy phenomenon.