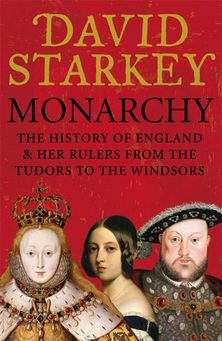 With both authority and verve, David Starkey unmasks the personalities and achievements, the defeats and victories, that lie behind the monarchs that form the backbone of British history.

This magisterial study begins with the Tudors – five monarchs who ruled over England and Ireland until the reformation of the 1530s – and continues with the Stuarts who followed them. It includes Oliver Cromwell, a non monarch, who ruled as Lord Protector, a ‘king in all but name’, and the Georgians, a dynasty that began with the accession of George I and ended with the death of George IV. In a new, final chapter Starkey brings his study to the present day, examining the iconic role of Victoria and her controversial successors; concluding with Elizabeth II and questions of what we have gained, or indeed lost, through the monarchy, and considering the troubled status of their future.

More important than this, ‘Monarchy’ encompasses the greatest and most notorious events in our history. From the War of the Roses to the infamous Gunpowder Plot, the bloody battles of the English Civil War to the madness of King George III, the Napoleonic Era to the heyday of Empire under Victoria, and finally to our present day Queen Elizabeth II,‘Monarchy’ offers a radical reappraisal of English nationhood, culture and politics, shown through the most central institution in English life. With characteristic insight and perceptiveness, Starkey gives new life to these figures, producing an entertaining and masterful picture of the building blocks upon which the England of today is built on.