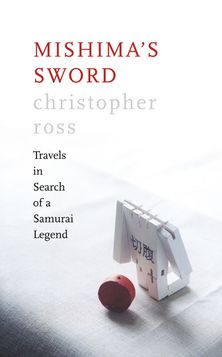 Mishima’s Sword: Travels in Search of a Samurai Legend

On 25 November 1970, after a failed coup d’état, Japanese writer Yukio Mishima plunged a knife into his tightly muscled belly, and was decapitated using his own antique sword. Mishima’s spectacular suicide has been called many things: a hankering for heroism; a beautiful, perverse drama; a political protest against Japan’s emasculated post-War constitution; the last act in a theatre of death; the epitaph of a mad genius. But which, if any, is correct? And what happened to Mishima’s sword?

Thirty years later Christopher Ross sets off for Tokyo on a journey into the heart of the Mishima Incident. While searching for Mishima’s sword and reassessing the life and anachronistic death of this uniquely complex man, he encounters those who knew Mishima, craftsmen and critics, soldiers and swordsmen, boyfriends and biographers – even the man who taught him hara-kiri. The cold trail he follows inspires digressions on, amongst other things, bushidô and socks, mutineers and Noh ghosts, nosebleeds and metallurgy – and how to dress for suicide.

Like his best-selling ‘Tunnel Visions’, Christopher Ross has written another unclassifiable blend of travel writing, autobiography and philosophical quest, an insider’s mesmeric account of modern Japan and a death that still haunts the nation.

Reviews of Mishima’s Sword: Travels in Search of a Samurai Legend