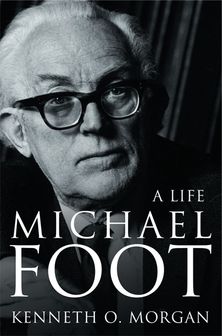 Michael Foot has been a controversial and charismatic figure in British public life, political and literary, for over sixty years. Emerging from a famous west-country Liberal dynasty, he rose as a crusading left-wing journalist in the late 1930s: ‘The Guilty Men’ (his book on the pre-war appeasers of Nazi Germany) is one of the great radical tracts of British history. He has been the voice of libertarian socialism in parliament, an international socialist and government minister, and was Labour leader for two-and-a-half years between 1980 and 1983. His political friendships with people like Beaverbrook, Cripps, Aneurin Bevan and Barbara Castle were passionate and profound, but he also had a remarkable and quite different career as a man of letters, with Dean Swift, Tom Paine, Hazlitt, Byron, Wordsworth, Heine, Wells and Silone amongst his heroes. Foot’s two-volume life of Aneurin Bevan is a triumph of political biography. Kenneth Morgan’s biography does full justice to both the public and the private side of Michael Foot – no more tellingly than his descriptions of Foot’s long and happy marriage to the filmmaker, feminist and writer Jill Craigie.