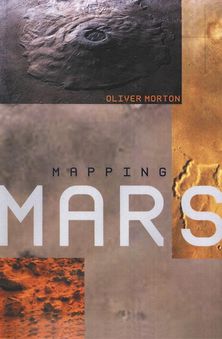 When Columbus first reached his new found land he had no idea what he might find: doubters still believed that he might discover nothing more than the edge of the world just before falling off it. The situation that greets the first man or woman to walk on Mars could not be more different. Mars is the most intensely observed and imagined place that humans have never been. Human names glitter on its surface, commemorating astronomers and physicists. Classical mythological identities have been stamped on its most prominent geographical features.

Oliver Morton has written a stellar narrative of Mars exploration not merely to laud the bravery and technical daring of the cosmologists and rocket scientists, but to examine how the process of exploration in space, of mapping, conditions what we discover there. Hence our understanding of the surface features of Mars is in part a product of the fact that a specialist in water movement and its erosion comes from Malham and sees on Mars a version of the limestone Yorkshire cliffs.

Our appreciation of Mars, made possible by ever more powerful telescopes and digitised signals, has increased far ahead of our ability to fulfil the benefits of all the Mars-gazing. But in our imaginations we have all but colonised the red planet: the work of Arthur C. Clarke, Ray Bradbury and Kim Stanley Robinson has filled the landscape with human potential and gloried in the grandeur of the scale of Mars’s natural palaces. Olympus Mons, its biggest volcano is more than three times the height of Everest and contains enough rock to cover the whole of Texas in a layer five miles deep. It’s that sense of awe that has gripped the troupe of researchers and astronomers who have held their sights firmly on Mars. Oliver Morton describes their glorious fixation, as they have come gradually to know and to understand and to colour the maps of Mars.