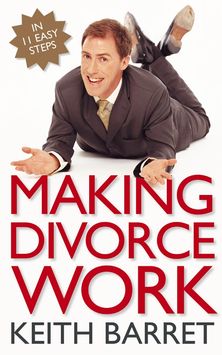 An hilarious spoof self-help book from the star of MARION & GEOFF and host of the new hit BBC comedy THE KEITH BARRET SHOW.

“I don’t feel like I have lost a wife but that I have gained a friend. I would never have met Geoff if Marion hadn’t left me.”

MARION & GEOFF was one of the most-loved and most-acclaimed BBC comedies of recent years. Rob Brydon wrote and starred as cuckolded Welsh cabbie Keith Barret, recording a hopelessly optimistic video diary about his life as a divorcee. It was a heartbreaking show; darkly comic and brilliantly written. The series won Best Drama at the South Bank Awards, and Rob Brydon won a British Comedy Award for his performance as Keith.

Last summer Brydon took his character Keith Barret to the Edinburgh Festival with a show (or rather a ‘talk’ or ‘therapy session’) entitled MAKING DIVORCE WORK, which drew on all of Keith’s experience as a divorcee. It was a sell-out, and the Daily Telegraph declared it ‘More outright hilarious than the TV series’.

Now, with a new primetime BBC TV series in the pipeline, Keith Barret has settled down and written an indispensable Self Help guide to surviving relationship break-ups. In MAKING DIVORCE WORK Barret offers advice for the broken-hearted on everything from getting access to the kids (“my little smashers”) to dating again. It is a brilliant parody of the Self Help genre (although Barret has written it with all sincerity), and an intimate portrait of Keith Barret; our favourite eternal optimist.