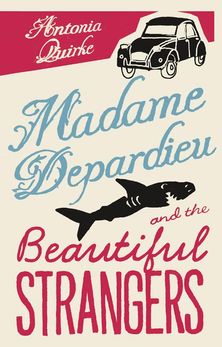 Madame Depardieu and the Beautiful Strangers

A unique memoir, ‘Madame Depardieu and the Beautiful Strangers’ is the story of how a young female film critic’s love-life is affected and nearly ruined by her obsession with male movie stars. As her increasingly hapless hunt for the right man unfolds and her television and newspaper career unravels, our heroine finally begins to understand that difficult truth: that life is not like the movies.

Entwined with the narrative of her real-life love affairs is a kaleidoscope of digressions on great screen actors – her dream-life with Gerard Depardieu, a personal ad seeking out Tom Cruise, a disastrous climactic encounter with Jeff Bridges. It’s a helter skelter ride through love and the movies which reads like a screwball comedy. And the screwball is our heroine, who seems to know everything about movies and the human heart, and nothing about anything else.

Written in a fresh and utterly engaging voice, ‘Madame Depardieu and the Beautiful Strangers’ is both moving and hilarious, a bittersweet and endearingly honest one-off.

Reviews of Madame Depardieu and the Beautiful Strangers