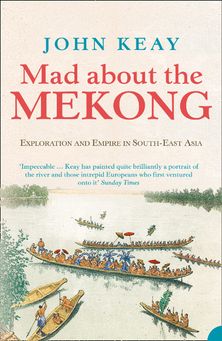 Mad About the Mekong

Any notion of sailing up the Mekong in homage to Francis Garnier has been unthinkable until now. From its delta in Vietnam up through Cambodia, Laos, Thailand, Burma and on into China, the Mekong has been a no-go river, its turbulent waters fouled by ideological barriers as formidable as its natural obstacles. But recently the political obstacles have begun to be dismantled – river traffic is reviving.

John Keay describes the world of the Mekong as it is today, rehabilitating a traumatised geography while recreating the thrilling and historic voyage of Garnier in 1866. The French expedition was intended to investigate the ‘back door’ into China by outflanking the British and American conduits of commerce at Hong Kong and Shanghai. Two naval gunboats headed upriver into the green unknown, bearing crack troops, naturalists, geologists and artists. The two-year expedition’s failures and successes, and the tragedy and acrimony that marked it, make riveting reading.

Reviews of Mad About the Mekong