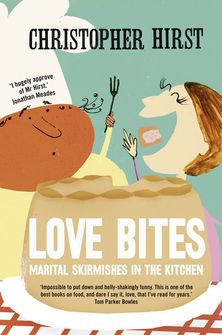 Prompted partly by gastronomic curiosity and partly by sheer greed, Mr H entered the kitchen with Mrs H as his guide. The result is perhaps the most honest food book ever written. It is certainly one of the funniest.

While exploring culinary items both famous and obscure, from pizza to pancakes, Seville orange marmalade to blancmange, they made an important discovery – there are several important differences between men and women in the kitchen.

Women in the kitchen (according to Mr H)

Men in the kitchen (according to Mrs H)

Many dishes in this perilous endeavour were seasoned with salty language and peppery outbursts. In the devastating heat of the kitchen, it was the most perilous of domestic adventures, but the marriage somehow survived.

Some couples climb Kilimanjaro, Mr and Mrs H made a pork pie.

Reviews of Love Bites: Marital Skirmishes in the Kitchen