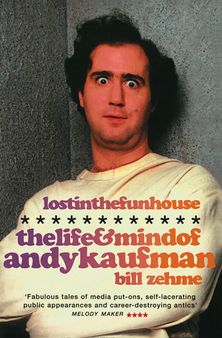 Lost in the Funhouse: The Life and Mind Of Andy Kaufman

First biography of the comedian Andy Kaufman, soon to be played by Jim Carrey in Milos Forman’s new film Man On The Moon.

In the 1970s a handful of young American comedians revolutionised US comedy. At the forefront was Andy Kaufman. From his debut on Saturday Night Live, lip-synching Mighty Mouse’s cry of “Here I come to save the day!”, to his role as Latka on the sitcom Taxi, Andy was breaking new ground, and hiding a vastly darker side.

Whether creating an alter-ego – lounge lizard Tony Clifton – or wrestling women, whatever the “gag” was, Andy Kaufman was living it. Part performance artist and part prankster, Kaufman lived his life as a relentless performance, and he inspired, and enraged those around him in equal measure. So when he was diagnosed as having cancer at 34, hardly anyone believed him, not even when they saw his body in the coffin…

With the full cooperation of Kaufman’s family, friends and colleagues, this is a trip into the dark side of a comic genius.

Reviews of Lost in the Funhouse: The Life and Mind Of Andy Kaufman