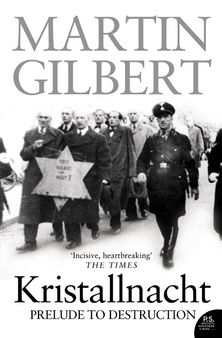 In ‘Kristallnacht’, Martin Gilbert seamlessly combines a moving account of the suffering of the victims of the Nazi regime with a sophisticated analysis of the gradual process which made the horrors of the Third Reich possible. Broadening his canvas, Gilbert also powerfully depicts how the rest of the world failed Europe’s increasingly desperate Jewish population: in the aftermath to Kristallnacht almost every country was asked to help; most would not do so, despite the transport of a staggering 10,000 German Jewish children to Britain. This international indifference had direct implications for future German policy, while the events of Kristallnacht went on to radically influence the attitudes of governments – and people – outside Germany towards Nazism.