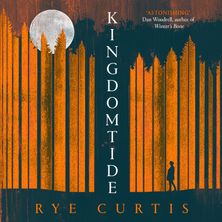 SHORTLISTED FOR THE 2021 DYLAN THOMAS PRIZE