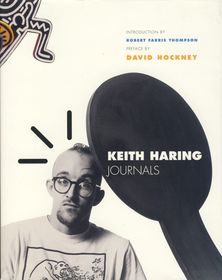 Keith Haring, who died in 1990 at the age of thirty-one, was renowned in his lifetime for his spontaneous almost grafitti-like archetypal imagery. He captured a street audience while ignoring the art establishment. His journals, kept from school days until just before his death from AIDS, dispel any notion of him as a naive artist and record his conscious committed drive to expand the boundaries of art. Here in his own words – illustrated with previously unpublished drawings from his notebook – is Haring’s evolution, from early subway chalk sketches to massive suburban steel sculptures; the pop icon catapulted to media fame; the international exhibition; the magazine covers; the friendships with Warhol, Leary and Burroughs.