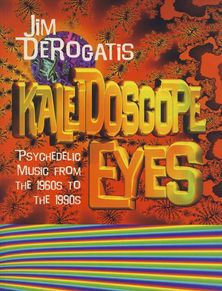 It all started as a simple attempt to recreate in music the hallucinogenic experience of dropping acid; it has evolved into the area of rock’n’roll that every new generation of the avant-garde has attempted to make its own. For, more than just a sound, psychedelia is a philosophy, a way of creating ‘the cinematic music of the imagination’.

From the early experiments of The Beatles’ REVOLVER to the ambient meanderings of The Orb, from the hypnotic drone of the Velvet Underground to the disorienting swirl of 90s guitar band My Bloody Valentine, psychedlic rock continues to produce a musical experience that is at once cerebral and transcendent.

Based on first-hand interviews and research, focusing on cult heroes such as Brian Eno and Julian Cope as well as rock legends like The Beach Boys and Pink Floyd, KALEIDOSCOPE EYES is authoritative, provocative and totally original.