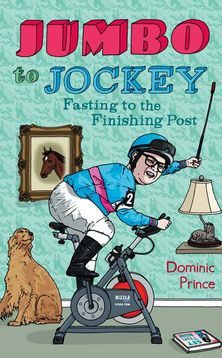 One midlife crisis, a horse and the diet of a lifetime

Dominic Prince, journalist, documentary-maker, racing enthusiast and bon viveur hit the scales at nearly 16 stone on his 47th birthday. It was not always so. His first love was and still is horses. As a child he would bunk off school to ride his first horse, Conker, and it was only after an horrific accident that left him and his horse wound up in barbed wire that he stepped down off his mount and gave in to the lure of Fleet Street and the three hour lunch.
But the smell of oats and the mist of early morning canters were never far away, even if he was living it from the other side of the paddock. In the 20 years since he last rode a horse he has made a film on Lester Piggott, bought and sold one race horse and won and lost thousands on ‘the occasional flutter’. Through the drastic changes to his overindulgent lifestyle that he has had to go through to make the weight for the 4pm at Wincanton in October, is weaved an insider’s account of the very particular world of jockeys, racing and the multi-billionaire owners who pull the strings at the world’s greatest race courses.
Memoir, sports book, exposé of the dark world of horse racing, at heart Jumbo to Jockey is the story that all middle aged men will know well of the realisation of a childhood dream before it is too late.