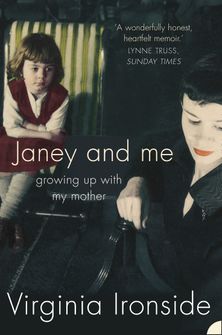 Stylish, beautiful and self-loathing, Janey Ironside was to lead a cultural revolution. In 1956 she became Professor of Fashion at the Royal College of Art, then an extraordinary appointment for a young mother. Discovering and promoting designers like Ossie Clark and Bill Gibb, she changed the way people dressed around the world and herself became a fashion icon. Yet the qualities that made her great – wit, talent and drive – did not bring happiness to either her or her family.

Having grown up in colonial India, Janey suffered a painful childhood separation from her parents. She married dashing artist Christopher Ironside, but eking out wartime rations ill-suited a woman whose idea of divine punishment was ‘to spend eternity washing up.’ Dress-making soon filled the void, while her daughter Virginia endured a string of au pairs, embarrassing outfits and acute loneliness.

As Virginia fought to be her own person, plunging into the swing of the sixties as a rock journalist, she was caught between a father she adored and a mother bent on self-destruction. Now a renowned writer, she has drawn a startling portrait of a gifted woman in a time of extraordinary change. Blackly comic, beautifully written and deeply moving, JANEY AND ME reflects the universal struggle to emerge from our parents’ shadow.

Reviews of Janey and Me