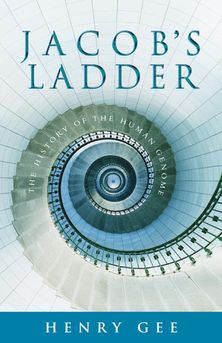 Jacob’s Ladder: The History of the Human Genome

In ‘Deep Time’ Henry Gee told us why the chicken came before the egg. In his new book, ‘Jacob’s Ladder’, he tells us the comprehensive answer to the simple question: how did I get here?

When the human genome was unveiled on 12 February 2001, headlines were filled with announcements that we had found the genes which cause schizophrenia, homosexuality and more. The assumption was that the genome offered a blueprint for what made human beings: the reality is far more complex and significant.

The true importance of our discovery of the engine of life is that it offers us the possibility of altering our evolutionary destiny. Biology, once a passive science of observation, now possesses the tools to create form from the formless. For the first time we have the opportunity to shape life; like the angels on Jacob’s Ladder, we are poised on the brink of godlike powers. But as Gee powerfully argues, we must exercise these powers with caution and learn from the mistakes of the past. He traces the entertaining history of man’s search for what brings form from the formless, revealing the extraordinary thinkers and often bizarre experiments that led to this epochal moment: from Aristotle’s musings and zany experiments with frogs and taffeta trousers which proved that sperm fertilised eggs, through the insights of poet scientists such as Goethe, to Darwin and the eventual discovery of the genome. Not only does the genome show us how each individual is created, but it reveals the evolutionary history of all species, telling the story of mankind’s survival against the odds.

This provocative and accessible book investigates the latest and most radical discoveries about what makes us human. In so doing, it uncovers processes that have only recently been suspected, and never before understood.

Reviews of Jacob’s Ladder: The History of the Human Genome