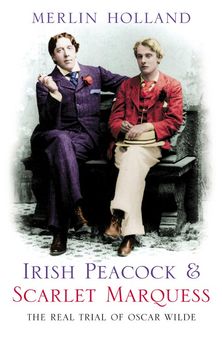 ‘As good as being in the gallery. Enthralling.’ Peter Ackroyd, The Times

The original transcript of the famous Wilde vs Queensberry trial, containing previously unseen details and exchanges. With extensive footnotes and a new introduction, this definitive account is a dramatic read that will delight Wilde enthusiasts and the general reader.

One of the most famous love affairs in literary history is that of Oscar Wilde and Lord Alfred ‘Bosie’ Douglas. When it became public, it cost Wilde everything. Merlin Holland has discovered the original courtroom transcript of the trial which led to his grandfather’s tragedy. Here at last is the true record, without the distortions of previous accounts.

Wilde’s fall from grace was swift: his case lost, prosecution by the Crown soon followed, ending in the imprisonment that destroyed his health – even as his art, as Wilde put it, improved through ‘suffering’.

In this remarkable book we witness Wilde’s confidence ebbing under the relentless questioning and see him lose track of the witty lines for which he was famous. Ultimately, it was his wit that betrayed him.