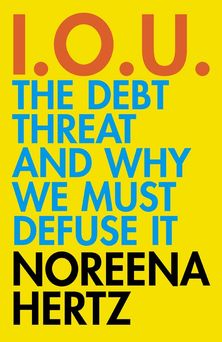 IOU: The Debt Threat and Why We Must Defuse It

We are bombarded with images of poverty, terrorism, war and collapsing states. Do we ever question what the root cause of these problems might be? Noreena Hertz, one of the world’s leading experts on economic globalization, tackles Third World Debt as a problem which must be resolved if we are ever to see global stability.

At the beginning of the new millennium we are witnessing a global debt crisis of unprecedented size. Sub-Saharan Africa owes $200 billion, Brazil $223.8 billion, Argentina $155 billion. Why does this matter? In this shocking, ground-breaking book, Noreena Hertz shows that these numbers matter because they account for millions of people dying of AIDS; for the rainforests being cut down; for poverty, illiteracy, terrorism and war. These numbers matter because they will affect all of our lives if the balance is not redressed.

‘IOU’ is a story of avarice but also of vulnerability; of power asymmetries and misuse of power; of corrupt dictators and careless lenders; of Cold War interests and Wall Street pressure; of third world governments who get given it, and third world people who have no access to it. Noreena Hertz, one of the world’s leading experts on economic globalisation, argues that this is not an issue of left or right: it is an issue of right versus wrong; of peace versus war. It must be addressed now.

Reviews of IOU: The Debt Threat and Why We Must Defuse It