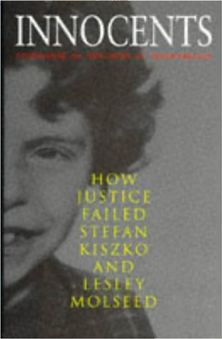 Lesley Molseed was eleven when she was killed in 1975. For sixteen years Stefan Kiszko served a prison sentence having been wrongly convicted of her murder by police anxious to find a culprit.

English justice catastrophically failed little Lesley Molseed and her family even though, at the trial of the man wrongly suspected of killing her, the finest barristers of the day were in court. One would go on to become Home Secretary, the other Lord Chief Justice at a time when Stefan Kiszko was serving a sixteen-year sentence and suffering unimaginable torment in prison as his mother and aunt and a small team of loyal supporters sought to overturn the miscarriage of justice. Their eventual success was followed by tragedy as first Stefan, then his mother died premature deaths, exhausted by their fight to have him proclaimed innocent. Further tragedy affected the families of other children, criminally abused by Lesley’s unpunished killer. Justice repeatedly failed the Innocents – and this is the story of that failure.