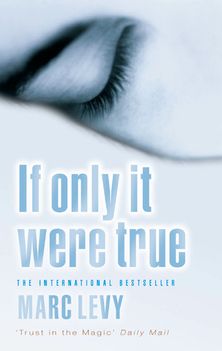 If Only It Were True

Fall in love all over again … Imagine … A couple unlike any you’ve ever met. A situation even they don’t understand. A spellbinding love story. And a remarkable literary debut. Marc Levy’s IF ONLY IT WERE TRUE.

A young San Francisco archictect, Arthur returns to his new apartment after an exhausting day. Relaxing in the bath, he hears fingers snapping in time to the music on his radio. He traces the noise to a closet, where, to his surprise, he finds a striking woman. Thinking she’s part of a practical joke he asks her to leave. But Lauren, stunned to discover that Arthur can see and hear her reveals the extraordinary truth to him. 6 months before, she was in a car crash; her body now lies in a hospital bed, in a coma. Since then, she has been forced to wander as a spirit, until frightened and lonely she came back to her apartment. The one her mother rented to Arthur after abandoning hope of her daughter recovering.

Initially sceptical, Lauren finally proves to Arthur that what she has said is true. Slowly they begin to explore uncharted areas of intimacy. But when the doctors decide to turn off the machines keeping Lauren alive, Arthur must find a way to save her. Mind, body and soul. For it is only her love that can save him…

Reviews of If Only It Were True