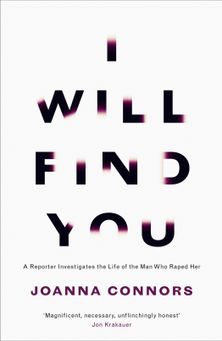 I Will Find You

Joanna Connors who was a 30-year-old newspaper reporter when she was raped. In the aftermath, she became afraid of everything – flying, driving, riding in a car while someone else drove. After she had children, she hovered over them constantly fearful for whatever might happen to them as well. But then, when her daughter was 16, Joanna began to confront the fears that had been ruling her life. Joanna’s prose moves with the propulsive energy of a thriller, as she investigates the biggest story of her life. Her investigation leads her into the past as she looks back at the attack itself and how it was handled by the police, prosecutors, the courts and by her family and colleagues and how the fear and shame she tried so hard to deny remained, casting its shadow over so much of her life. From there, her investigation leads her forward to surprising discoveries, encounters with unforgettable characters, and sometimes into dangerous situations.

Reviews of I Will Find You