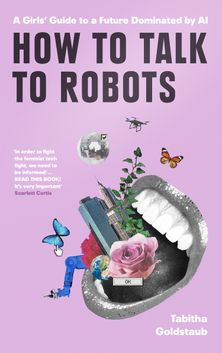 How To Talk To Robots: A Girls’ Guide To a Future Dominated by AI

’…an essential and fascinating manual for every woman who wants to understand equality within an ever-changing, modern world.’ Scarlett Curtis

How To Talk To Robots, is your girls guide to Artificial Intelligence. Entrepreneur Tabitha Goldstaub welcomes you into the AI world with a warm embrace. She brilliantly breaks down the tech-bro barriers offering a straightforward introduction and makes clear the enormous benefits of understanding AI.

If your social feed defines your spending habits or you’ve downloaded the latest filter to see what you’ll look like when you are old or now connect with your doctor using an app, have applied for a job online or used your phone to arrive at work in record time, AI is playing a part in how you live, work and play. We live in an era where machines are taught to learn and act without human intervention and there are infinite possibilities to their applications. The risk of these technologies biasing against you is real, and this book will give you tools to navigate the current and future developments consciously.

As well as explaining the risks Tabitha lays out the awesome benefits AI can offer. From spotting disease to tailoring education and tackling climate change the potential rewards are life-changing.

Starting with a potted history, Tabitha shines a light on the many unsung heroines since the rise of AI in the 1960s. In conversation with Karen Hao she simply demonstrates how the technology works (and sometimes doesn’t work!) and interviews a cross-section of women who use AI in their work today including Jeanette Winterson, Sharmadean Reid, Martha Lane Fox and Hannah Fry. This book doesn’t just present the challenge; Tabitha offers supportive practical advice and shares an extensive list of books, films, courses and more for further exploration.

However it is that you identify with womanhood, wherever you are in life, and whatever you do, this technology is inescapable and now is your time to make sure AI works for you – and not you for it!

Reviews of How To Talk To Robots: A Girls’ Guide To a Future Dominated by AI