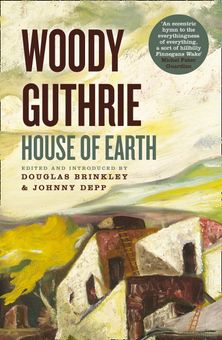 Newly discovered, and with an introduction by Johnny Depp, this is legendary American folk singer Woody Guthrie’s only finished novel: a compelling portrait of two hardscrabble farmers struggling during the Dust Bowl.

Filled with the homespun lyricism that made Guthrie’s songs unforgettable, this is the story of an ordinary couple’s dream of a better life in a corrupt world. Living in a precarious wooden shack, Texan farmers Tike and Ella May yearn for a sturdy house to protect them from the treacherous elements. Thanks to a government pamphlet, Tike knows how to build a simple adobe dwelling from the land itself— a house of earth. But while the land on which Tike and Ella May live and work is not theirs, their dream remains painfully out of reach.